Legendary Entertainment and Warner Bros. just dropped a trailer for Godzilla vs Kong, a movie set to release on March 26, 2021, in both theaters and on HBO Max. 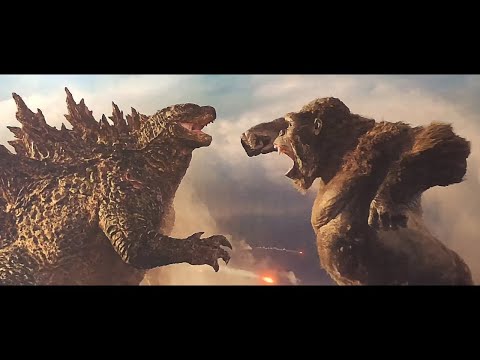 Godzilla is supposed to be a friend to mankind, as is Kong. Why the hell are the two Titans fighting each other?! My best guess is Godzilla is being manipulated by someone or something. I even heard a rumor that MechaGodzilla makes an appearance in the movie…

Check out the scale difference in Kong, too. Producers made Kong much larger than previous movies, making him as tall a Godzilla. I like the change, especially considering the first King Kong movie, Kong: Skull Island (2017), mentioned Kong was still growing and the movie takes place in 1973.

Kong even has what looks like a battle-ax or pike, that glows blue. Odds are Kong’s weapon is fashioned from one of Godzilla’s back spikes, which makes sense when you see it absorb Godzilla’s blue dragon breath.

In the last film in the franchise, Godzilla King of the Monsters, we catch a glimpse of a map showing the location of 17 known Titans. I wonder if we’ll see a few more than Kong and Godzilla in this flick.

Before you watch Godzilla vs. Kong, Watch the Previous Movies in Legendary’s Monsterverse

From Wikipedia: Godzilla is a 2014 American monster film directed by Gareth Edwards. It is a reboot of Toho’s Godzilla franchise and is the 30th film in the Godzilla franchise, the first film in Legendary’s MonsterVerse, and the second Godzilla film to be completely produced by a Hollywood studio. The film stars Aaron Taylor-Johnson, Ken Watanabe, Elizabeth Olsen, Juliette Binoche, Sally Hawkins, David Strathairn, and Bryan Cranston. In the film, a soldier attempts to return to his family while caught in the crossfire of an ancient rivalry between Godzilla and two parasitic monsters known as MUTOs.

From Wikipedia: Kong: Skull Island is a 2017 American monster film directed by Jordan Vogt-Roberts. It is a reboot of the King Kong franchise and serves as the second film in Legendary’s MonsterVerse. The film stars Tom Hiddleston, Samuel L. Jackson, John Goodman, Brie Larson, Jing Tian, Toby Kebbell, John Ortiz, Corey Hawkins, Jason Mitchell, Shea Whigham, Thomas Mann, Terry Notary, and John C. Reilly. In the film, set in 1973, a team of scientists and Vietnam War soldiers travel to the uncharted Skull Island and meet the mighty Kong, a gigantic ape who is the last of his species, closely followed by other terrifying creatures.

From Wikipedia: Godzilla: King of the Monsters is a 2019 monster film directed by Michael Dougherty and co-written by Dougherty with Zach Shields. A sequel to Godzilla (2014), it is the 35th film in the Godzilla franchise, the third film in Legendary’s MonsterVerse, and the third Godzilla film to be completely produced by a Hollywood studio. It is dedicated to executive producer Yoshimitsu Banno and original Godzilla suit performer Haruo Nakajima, both of whom died in 2017.

The film stars Kyle Chandler, Vera Farmiga, Millie Bobby Brown, Bradley Whitford, Sally Hawkins, Charles Dance, Thomas Middleditch, Aisha Hinds, O’Shea Jackson Jr., David Strathairn, Ken Watanabe, and Zhang Ziyi. In the film, humans must rely on Godzilla and Mothra to defeat King Ghidorah, who has awakened other Titans to destroy the world. The sequel was green-lit during the opening weekend of Godzilla, with Gareth Edwards expected to return to direct a trilogy. In May 2016, Edwards left the project. In October 2016, Dougherty and Shields were hired to rewrite the script. In January 2017, Dougherty was announced as the director. Principal photography began in June 2017 in Atlanta, Georgia, and wrapped in September 2017.

This site uses Akismet to reduce spam. Learn how your comment data is processed.

Any cookies that may not be particularly necessary for the website to function and is used specifically to collect user personal data via analytics, ads, other embedded contents are termed as non-necessary cookies. It is mandatory to procure user consent prior to running these cookies on your website.